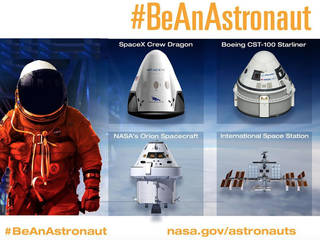 During their careers, the next generation of astronauts may fly on any of four different U.S. spacecraft: the International Space Station, two NASA Commercial Crew Program spacecraft currently in development by U.S. companies, and NASA’s Orion deep-space exploration vehicle. 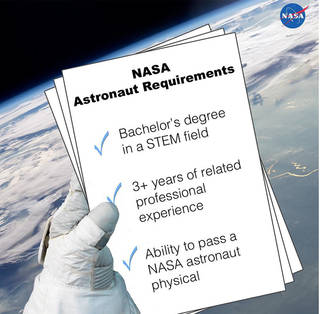 What does it take to be an astronaut? 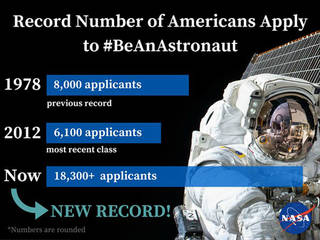 In 2016, NASA received a record-breaking number of applications from people who wanted to become astronauts. One of these applicants may be one of the first explorers to travel to Mars.

Within the next few decades, humans could be leaving their footprints on the Red Planet! That’s the plan, as NASA continues to prepare to expand human exploration in the solar system. Astronauts currently work as scientists on the International Space Station — the test bed for cutting-edge research and technologies that will enable human and robotic exploration of destinations beyond the station’s low-Earth orbit. The Orion spacecraft atop the Space Launch System (SLS) rocket will carry humans farther into space then they have gone before — beyond the moon and eventually to Mars.

NASA’s commercial partners are transporting cargo — and soon, crew — to the International Space Station. The need for crew members on these spacecraft and missions will continue. At times, NASA will put out a call for new astronauts.
A Very Brief History of Astronaut Selection

The military selected the first astronauts in 1959. They had to have flight experience in jet aircraft and a background in engineering. And they had to be shorter than 5 feet 11 inches – to fit in the Mercury spacecraft.

But, in addition to flight and engineering expertise, space exploration requires scientific knowledge and the ability to apply it. So, in 1964, NASA began searching for scientists to be astronauts. Back then, one qualification for scientist-astronauts was a doctorate in medicine, engineering, or a natural science such as physics, chemistry or biology.
So, What Does It Take to Be an Astronaut?

Astronaut requirements have changed with NASA’s goals and missions. A pilot’s license and engineering experience is still one route a person could take to becoming an astronaut, but it’s no longer the only one. Today, to be considered for an astronaut position, U.S. citizens must meet the following qualifications:

Astronaut candidates must also have skills in leadership, teamwork and communications.

NASA’s Astronaut Selection Board reviews the applications (a record-breaking 18,300 in 2016) and assesses each candidate’s qualifications. The board then invites about 120 of the most highly qualified candidates to NASA’s Johnson Space Center in Houston, Texas, for interviews. Of those interviewed, about half are invited back for a second round. Once the final astronauts are selected, they must complete a two-year training period.

With NASA’s plans for the future of exploration, new astronauts will fly farther into space than ever before on lunar missions and may be the first to fly on to Mars.