Should I take Pepper the Humanoid Robot with me to Mars?

Pepper is a humanoid robot by French robotics company Aldebaran Robotics, which is owned by SoftBank, designed with the ability to read emotions. It was introduced in a conference on 5 June 2014, and was showcased in Softbank mobile phone stores in Japan beginning the next day.[1][2] It was scheduled to be available in February 2015 at a base price of JPY 198,000 ($1,931) at Softbank Mobile stores.[3] Pepper’s emotion comes from the ability to analyze expressions and voice tones. In Japan there is also a monthly fee of $360 that has to be paid over 3 years.

Pepper was launched in the UK in 2016 and there are currently two versions available.

The robot’s head has four microphones, two HD cameras (in the mouth and forehead), and a 3-D depth sensor (behind the eyes). There is a gyroscope in the torso and touch sensors in the head and hands. The mobile base has two sonars, six lasers, three bumper sensors, and a gyroscope.[4]

It is able to run the existing content in the app store designed for Aldebaran’s other robot, Nao.[5]

Pepper is not a functional robot for domestic use. Instead, Pepper is intended “to make people happy”, enhance people’s lives, facilitate relationships, have fun with people and connect people with the outside world.[6] Pepper’s creators hope that independent developers will create new content and uses for Pepper.[7]

Pepper is currently being used as a receptionist at several offices in the UK and is able to identify visitors with the use of facial recognition, send alerts for meeting organisers and arrange for drinks to be made. Pepper is said to be able to chat to prospective clients.

The robot has also been employed at banks and medical facilities in Japan, using applications created by Seikatsu Kakumei.[8][9][10]

Pepper is available as a research robot for schools, colleges and universities to teach programming and conduct research into human-robot interactions. In the United Kingdom, it is available through Rapid Electronics Limited for this purpose.

An Android SDK will be available in 2017. 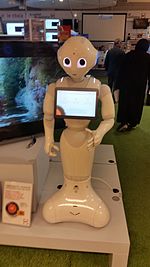