What Thunderbolt 3 and USB-C Mean to Musicians and Engineers 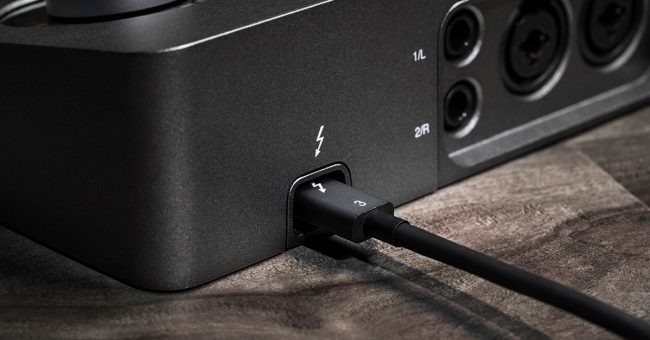 When standards like Thunderbolt and USB evolve, it seems the inevitable result is more complications — like needing different cables, connectors, and adapters. Wouldn’t it be wonderful if this kind of evolution instead resulted in a simpler world, so you could just get on with making music?

That’s the potential of the USB-C connector, as used with both Thunderbolt 3 and USB 3.1 for data and power transfer. Remember all those funny computer AC adapter bricks, wall warts, and line lumps, each with a connector that didn’t work with anything else? Forget them — you’ll be charging your computer over USB-C. And what about those USB Type-A, Type-B, Mini-A, Mini-B, Micro-A, and Micro-B connectors littering your studio like unwanted house guests? Gone. Instead, you’ll have a bunch of high-quality USB-C cables capable of handling plenty of power. That AC adapter for your audio interface that wasn’t compatible with anything else on the planet? You won’t even need the AC adapter, as long as the computer it plugs into has enough juice to power the interface.

Sound good to you? Well, that time is here. Like all major changes, there are some initial issues as specs and gear settle into something new, but these advanced protocols already offer significant advantages.

Hey! They Use the Same Connector!

It used to be that each protocol had its own connector type — you wouldn’t mistake an SCSI port for a FireWire port, or USB for Thunderbolt. USB-C changes all that, because it’s intended to be a universal cable and connector specification. A USB-C connector is a significant improvement over the bulky connectors of the past: it’s reversible, so you can’t plug cables in upside down, and it is wicked thin so it will fit in just about anything — which is why many new smartphones use USB-C. This also means USB-C hubs can be smaller, and you’ll be able to fit more ports in tablets and small laptops.

Note: The term USB-C describes only the physical cable and connector, not the data speed or charging capability.

Because Thunderbolt 3 and USB 3.1 Gen 2 (the latest generation for USB) use the same connector, it’s not surprising that some people are confused over which is which, or think they must be the same — but there are significant differences.

Thunderbolt 3 is currently the fastest data transfer protocol. It can transfer up to 40 Gbit/s with short cable runs (depending on whether you’re using passive or active cables — more info below), and 20 Gbit/s with longer cables. USB 3.1 Gen 2 tops out at 10 Gbit/s. (Note these figures are best-case — not all peripherals can run at those speeds.) Thunderbolt is also bidirectional and provides four lanes for PCI Express Gen 3 and eight lanes for DisplayPort 1.2 connections. What’s more, you can also daisy-chain multiple Thunderbolt devices so they share a single Thunderbolt port; whereas every USB device is a selfish little critter that needs to connect via its own cable to its own port.

So here’s the bottom line: if you want an audio interface with no perceptible latency, and/or need to drive multiple monitors or external high-speed graphics cards, Thunderbolt 3 is the ticket.

Thunderbolt 3 was designed to be the “one protocol to rule them all,” so it can connect not only to Thunderbolt-aware devices but also to older protocols like HDMI or FireWire via adapters. Perhaps more importantly — and one of the reasons for confusion — is that Thunderbolt 3 can also connect to the billions of USB devices.

Although USB 3.1 Gen 2 devices use an identical USB-C connector, this is solely for connecting to USB peripherals (some do support sending signals to DisplayPorts, but this isn’t guaranteed), which brings us to the connector version of New Rules:

(By the way, no law says a USB-C connector has to run USB 3.1 or Thunderbolt 3, so you may find some occasional USB-C connector-laden smartphones that run at USB 2.0 speeds. Just ignore them, and maybe they’ll go away.)

Is Your Cable Able?

One of the USB-C connector’s advantages is that there’s a companion USB-C specification called USB PD (Power Delivery). Devices using USB-C connectors, whether with Thunderbolt or USB peripherals, can deliver up to 100 watts of power for charging, or up to 15 watts to power bus-powered devices (like audio interfaces). The power delivery coexists with data and is bidirectional, so not only can a host charge a peripheral, but a peripheral can also charge a host. For example, if you plug a laptop into a display with a USB-C connector to play back a video, you could charge the laptop battery while watching the video.

However, note the “up to” comment above: a device’s “power profile” determines whether the maximum available power is 10 watts (2 amps at 5 volts), 60 watts (5 amps at 12 volts), or 100 watts (5 amps at 20 volts). And there’s no guarantee that a device with a USB-C connector follows the USB PD spec any more than a keyboard supports polyphonic aftertouch just because it has a MIDI output jack, so USB PD-friendly USB devices have a battery graphic associated with the usual USB SS logo. Furthermore, you need cables that can handle the power; that skinny cable you’re using to charge your smartphone probably isn’t macho enough to charge your 70-watt laptop. Like record company contracts, read the fine print — especially when trying to use a newer device with an older port that may not be able to provide sufficient power.

A few more fine points: passive Thunderbolt 3-compatible cables can do 40 Gbit/s only at lengths of half a meter or less, and 20 GBit/s with 1- to 2-meter lengths. To do 40 Gbit/s at lengths up to 2 meters, you need to shell out more bucks for an active Thunderbolt 3 cable. On the USB 3.1 side of things, you need cables that can handle the higher speeds — the cable that came with your stereo USB 1.1 interface at the turn of the century won’t do the job.

Back to the Future

A major concern when protocols evolve is backward compatibility. Both Thunderbolt 3 and USB 3.1 are electrically compatible with previous generations, although you’ll need physical adapters. Thunderbolt 3 devices with a suitable bidirectional adapter can connect to previous-generation Thunderbolt ports, and USB 3.1 devices will work with previous-generation USB ports, although of course you won’t gain the speed advantage of the newer protocols using older ports.

However, all the above is preceded with “in theory.” With the proliferation of computer hardware generations and operating systems, backward compatibility is never guaranteed. If you’re using modern hardware with integrated Thunderbolt and a recent operating system, all should be well. But if you’re using an overclocked Pentium 4 running Windows XP and think you can just install a Thunderbolt card and all will be well — it won’t be.

Or if you’re running Boot Camp with Windows 7, 8, or 10 on a Mac with a Thunderbolt device plugged in, the Mac won’t be able to go to sleep — and if you try to reconnect a Thunderbolt device you disconnected, you’ll need to restart the Mac before the device will be recognized.

Realistically, though, these are “corner cases,” and as long as you don’t intend to stray too far from the wide world of best practices, you’ll likely be okay. There’s lots of information on the web, and Sweetwater’s Sales Engineers keep on top of recent developments as well. In any case, although we have an increasingly data-hungry and complex world, it looks like USB-C, USB 3.1 Gen 2, and especially Thunderbolt 3 are arriving just in the nick of time to deal with that data — and in the process, simplify our lives.