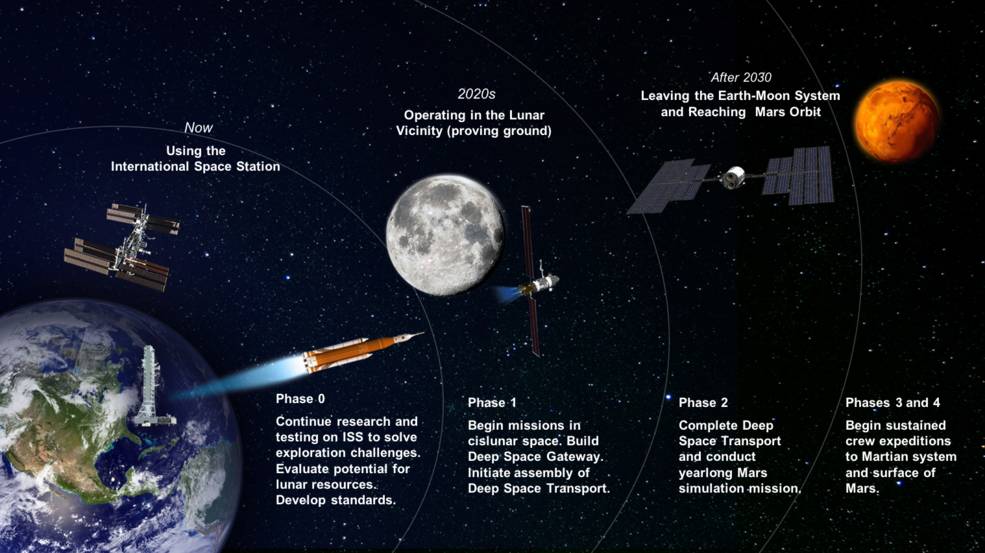 The development of earth independence extends human presence beyond low Earth orbit and cislunar space and onto Mars. Missions during this stage of exploration range from 2-3 years with safe return of the crew to Earth taking months. Johnson Space Center provides agency leadership for the development and analysis of human spaceflight architectures, mission plans, and surface system definitions.  JSC is a leader in technology developments for Habitats, Space Suits, In-Situ Resource Utilization, and Entry, Decent, and Landing Systems and provides unique mission integration and test environments. Johnson Space Center is the agency’s lead center for Astromaterials and a leader in the science of planetary destinations.

Entry, Descent, and Landing technologies ensure precise and safe landings on planetary surfaces and encompass the full range of sensors and components, guidance and navigation systems, testing and qualification, and mission operations capable of achieving the following:

At the Johnson Space Center and other NASA Centers, high level mission objectives for future human Mars missions are translated into specific surface systems and concepts of operations to achieve these objectives.  At present NASA has embarked on an approach that will allow human crews to live and work productively on Mars for extended periods of time and gradually become independent of support from Earth.  This requires not only an understanding of the Mars mission requirements but also constraints imposed by the Martian environment and the “known unknowns” that must be investigated and incorporated into an overall approach to pioneering on the surface of Mars.

The Johnson Space Center is responsible for identifying and evaluating candidate locations on the surface where humans could live and work productively.  Concepts such as the Exploration Zones and adaptation of the “field station” have originated here.  Adaptation and integration of specific surface system design concepts to achieve mission objectives is also a key aspect of Johnson Space Center’s role in the overall process of becoming “Mars Ready” for these future missions.

Mission success through all stages of the Journey to Mars relies on the integration of science and engineering into all aspects of human exploration.  Mission relevant environments are key to testing a wide range of technologies, tools, and techniques in addition to trainingthe astronaut and ground operations crews in immersive environments.  Achieving early integration of science, engineering, system operations, and prototype testing in a mission relevant environment will greatly increase the mission returns, reduce the risks, and improve the affordability of deep-space missions. This includes bio-medical systems, astronaut health and performance, mission operations concepts, communications, EVA, field science, robotics, and much more.  At Johnson Space Center and other partnering centers, multi-disciplinary science and engineering teams design and carry out authentic mission tests to mature technologies and advance our readiness for deep space human exploration.

Space radiation risks to astronauts must be reduced to the lowest achievable level.  New technologies are being developed to increase crew mission duration in the free-space radiation environment while remaining below the space radiation permissible exposure limits (PELs).  These technology development objectives center on the following:

Human exploration will require leveraging robotic systems in all phases of the mission as precursors to crewed missions, as crew helpers in space, and as caretakers of assets left behind.  The goals are to extend our reach into space, expand our planetary access capability, increase our ability to manipulate assets and resources, support our astronaut crews during their space operations, extend the life of the systems they leave behind, and enhance the efficacy of human operations.  To achieve these ends, robotic capabilities will be extended in these areas:

We explore to extend our human presence throughout our solar system.  We also explore to enrich our scientific understanding of other planets, our Moon, and nearby asteroids.   There is a mission critical need to understand the varied and extreme planetary surfaces we will visit on the Journey to Mars.   The harsh, rocky environments of the Moon, asteroids, Mars, and other destinations experience a wide range of temperatures, gravity, radiation, rock and mineral types, dust, and other environments that must be understood to correctly design spacecraft, landing systems, environmental and life support, space suites, ISRU systems, and science instruments.  Johnson Space Center leads the agency in Astromaterials Curation and research into these planetary destinations as a resource for astromaterials and simulants for testing and analysis, and actively participates in active robotic missions on Mars as well as past, current, and future human science exploration.