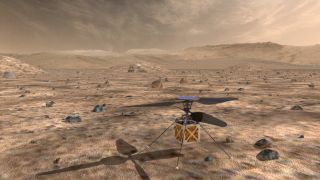 The 4-lb. Mars Helicopter will travel to the Red Planet with NASA’s next Mars rover, which is scheduled to launch in mid-2020.
(Image: © NASA/JPL)

A few brief hops in the Martian air two years from now could help open alien worlds to an entirely new kind of exploration.

An autonomous mini-helicopter will fly with NASA’s Mars 2020 rover mission, which is scheduled to launch in July of that year and land on the Red Planet in February 2021.

The bantam chopper is a stripped-down technology demonstration, and it will make a maximum of five short sorties in the Martian atmosphere. Success in this pioneering work would be a big deal, extending the reach of humanity’s robotic explorers, which are currently restricted to the surfaces of alien worlds or the dark realms far above them.

One day, more-advanced versions could serve as scouts for rovers or explore the Red Planet on their own, added Grip, who’s based at NASA’s Jet Propulsion Laboratory and the California Institute of Technology, which are both in Pasadena.

“In the future, we could imagine doing things like [engaging in] regional exploration using multiple helicopters or going to inaccessible areas or biologically sensitive areas using small helicopters,” he said.

The Mars Helicopter weighs 4 lbs. (1.8 kilograms) and has a body about the size of a softball. It carries a range of avionics and communications gear, a small solar panel, rechargeable lithium-ion batteries, “survival heaters” to keep its electronics warm through the frigid Martian night, and a navigation camera.

The helicopter doesn’t have any science instruments, but it is outfitted with a high-resolution color imager.

“That’s, so to speak, the payload,” Grip said. “That’s what we [use to] take pretty pictures and send them back to Earth.”

The helicopter will travel to Mars attached to the belly of the car-size 2020 rover, which will hunt for signs of ancient Red Planet life and collect and store samples to return to Earth in the future, among other tasks.

Related: The Search for Life on Mars: A Photo Timeline

A month or two after the rover lands on the Red Planet, the chopper will drop down and hit the dirt itself. The little vehicle will then make a series of short flights, each of which will last about 90 seconds and reach a maximum altitude of 16.5 feet (5 meters) or so, Grip said.

These sorties will be made between 330 feet and 3,300 feet (100 to 1,000 m) away from the rover — far enough away to pose no collision danger, but close enough to be in communications range. (The helicopter will talk to its handlers on Earth via the rover.)

Success would be quite an achievement, considering that the Martian atmosphere is just 1 percent as dense as that of Earth at sea level. Cruising just above the Martian surface is equivalent to flying at an altitude of 100,000 feet (30,000 m) here on Earth, more than twice as high as any helicopter has ever gotten. (The handicap imposed by the thin air is only partially offset by the Red Planet’s lower gravity, which is 38 percent that of Earth, Grip said.)

To generate enough lift, the Mars Helicopter sports two stiff rotors that measure 3.9 feet (1.2 m) long — pretty much as big as the team could make them, Grip said. And the rotors will spin at 2,400 revolutions per minute, about 10 times faster than the blades of a chopper on Earth, mission team members have said.

The team has put this design through its paces many times in Mars-like conditions here on Earth, Grip said. Indeed, the little craft is pretty much ready to go.

“The flight model is built and more or less tested,” Grip said.

The ultimate test, of course, will come on Mars.

“The Mars Helicopter’s initial flight will represent that planet’s version of the Wright brothers’ achievement at Kitty Hawk and the opening of a new era,” Susan Gorton, manager of NASA’s Revolutionary Vertical Lift Technology project, which has been working with the Mars Helicopter team, said in a statement last week.

“For those of us whose research revolves around all things related to flight, that would be a remarkable, historic moment,” Gorton added.

Such historic moments may not be limited to Mars’ skies. NASA is considering launching a quadcopter lander to Titan, Saturn’s huge, haze-enshrouded moon. This mission, called Dragonfly, would fly from spot to spot on Titan, investigating the complex chemistry occurring on the potentially life-supporting moon.

Dragonfly is one of two finalists for a mid-2020s launch slot under NASA’s New Frontiers program of medium-cost missions. The other contender is a comet sample-return mission called CAESAR. NASA is expected to announce its selection later this year.

The Mars Helicopter and Dragonfly teams have not collaborated to date, Grip said.