Not all rovers are designed to roam around on the surface of other worlds like Mars. One rover, at least, is aquatic; a necessary development if we’re going to explore Enceladus, Europa, and the Solar System’s other watery worlds.

This rover is called the Buoyant Rover for Under-Ice Exploration, or BRUIE.

This is not a swimming, submarine type of vehicle. It’s a wheeled vehicle designed to drive upside down on ice sheets. BRUIE is buoyant, which keeps it pressed against the ice ceiling.

BRUIE is currently in the Antarctic, at Australia’s Casey Research Station. During the next month, operators will put it through its paces, testing its endurance in anticipation of a future mission to an icy ocean world, likely Europa. The testing will focus on interface areas, where the ice sheet meets water.

Ice-water interface areas are important because on worlds like Europa, they can have very dynamic chemistry, partly because dissolved impurities are rejected from an advancing ice front.

On living worlds like Earth, there are also higher concentrations of life forms in these types of interfaces. Scientists can also learn a lot from the topography of the underside of the ice, including how the ice forms. And the ice can act as a trap for gases, either from biological or geological processes.

Kevin Hand is the JPL lead scientist on the BRUIE project. Hand, and many others in the scientific community, think that lunar oceans in our Solar System – Europa, Enceladus, and others – are likely the best place to look for life. Submersible robots will have to play a role in exploring them.

“The ice shells covering these distant oceans serve as a window into the oceans below, and the chemistry of the ice could help feed life within those oceans. Here on Earth, the ice covering our polar oceans serves a similar role, and our team is particularly interested in what is happening where the water meets the ice,” said Hand.

But the interface area can be difficult to explore. Submersibles aren’t practical.

“We’ve found that life often lives at interfaces, both the sea bottom and the ice-water interface at the top. Most submersibles have a challenging time investigating this area, as ocean currents might cause them to crash, or they would waste too much power maintaining position,” said lead engineer Andy Klesh.

“BRUIE, however, uses buoyancy to remain anchored against the ice and is impervious to most currents. In addition, it can safely power down, turning on only when it needs to take a measurement, so that it can spend months observing the under-ice environment.”

BRUIE is one meter long (3 feet) and equipped with two wheels. It rolls along on the underside of the ice, and has cameras and lights and communication equipment on it. It can also carry some scientific instruments, which will be attached later, if initial testing goes well.

During previous testing in the Arctic, the rover spent some time untethered, communicating through the ice to a base station, and eventually to JPL. But during the Antarctic tests it will be tethered.

Dan Berisford is a mechanical engineer working on this project. In a press release, Berisford said, “BRUIE will carry several science instruments to measure parameters related to life, such as dissolved oxygen, water salinity, pressure and temperature.”

Berisford will be attaching the science instruments if early tests go well.

We don’t know what life on Europa or Enceladus will look like, if it’s there. We won’t necessarily know how to detect its presence, either. But the search has to start somewhere.

“Once we get there,” Berisford added, “we only really know how to detect life similar to that on Earth. So it’s possible that very different microbes might be difficult to recognize.”

Scientists have developed other concepts for exploring the icy ocean moons. One obstacle facing vehicles like BRUIE is the thickness of the ice.

On Europa, the ocean is buried beneath a massive sheet of ice that could be up to 30 km (19 miles) thick. During Antarctic testing, the team will just drill holes in the ice and insert BRUIE.

One preliminary concept for exploring the ocean under Europa’s ice sheet is a nuclear-powered tunneling robot. It’s the result of a concept study, where the goal is to begin to think about the challenge of exploring Europa. Heat from nuclear power would melt the ice and the vehicle would propel itself through the hole.

Once through, some other type of vehicle could be dispatched to explore. While artist’s concept images show a swimming submersible, a vehicle based on BRUIE might be more realistic. 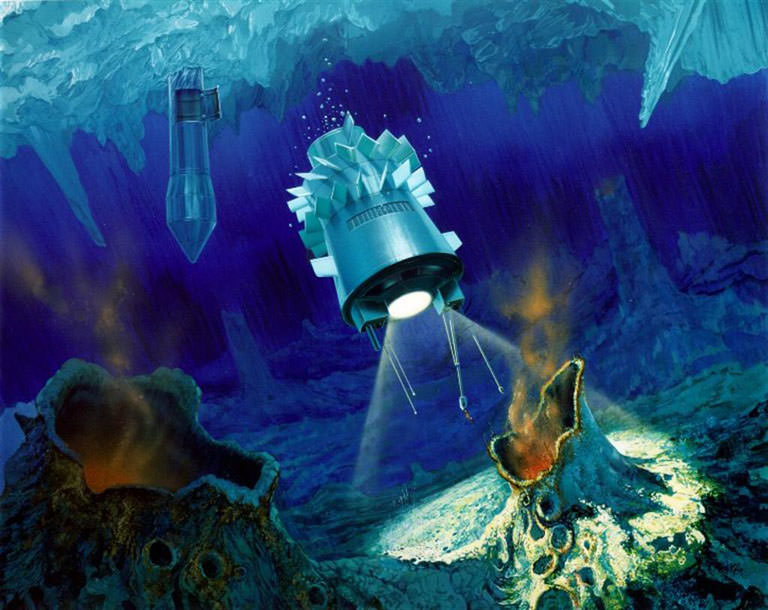 The goal of this Antarctic testing is to get BRUIE to survive under the ice for months at a time. The team will also be further developing the vehicle’s ability to operate without a tether, and to explore at greater depths.

While there’s no timeline for a mission to Europa that would actually explore the ocean, there is the upcoming Europa Clipper mission. NASA’s launching the Clipper in the mid-2020s.

It’ll take a detailed look at Europa, and hopefully help us understand if it can support life, and if the next step to look for it is a vehicle like BRUIE.

This article was originally published by Universe Today. Read the original article.