NASA Scientists Show How Ingredients for Water Could Be Made on Surface of Moon, a ‘Chemical Factory’

When a stream of charged particles known as the solar wind careens onto the Moon’s surface at 450 kilometers per second (or nearly 1 million miles per hour), they enrich the Moon’s surface in ingredients that could make water, NASA scientists have found.

Using a computer program, scientists simulated the chemistry that unfolds when the solar wind pelts the Moon’s surface. As the Sun streams protons to the Moon, they found, those particles interact with electrons in the lunar surface, making hydrogen (H) atoms. These atoms then migrate through the surface and latch onto the abundant oxygen (O) atoms bound in the silica (SiO2) and other oxygen-bearing molecules that make up the lunar soil, or regolith. Together, hydrogen and oxygen make the molecule hydroxyl (OH), a component of water, or H2O.

“We think of water as this special, magical compound,” said William M. Farrell, a plasma physicist at NASA’s Goddard Space Flight Center in Greenbelt, Maryland, who helped develop the simulation. “But here’s what’s amazing: every rock has the potential to make water, especially after being irradiated by the solar wind.”

Understanding how much water — or its chemical components — is available on the Moon is critical to NASA’s goal of sending humans to establish a permanent presence there, said Orenthal James Tucker, a physicist at Goddard who spearheaded the simulation research.

“We’re trying to learn about the dynamics of transport of valuable resources like hydrogen around the lunar surface and throughout its exosphere, or very thin atmosphere, so we can know where to go to harvest those resources,” said Tucker, who recently described the simulation results in the journal JGR Planets.

Download solar wind on the Moon graphic as PDF (8.68 MB)

Several spacecraft used infrared instruments that measure light emitted from the Moon to identify the chemistry of its surface. These include NASA’s Deep Impact spacecraft, which had numerous close encounters with the Earth-Moon system en route to comet 103P/Hartley 2; NASA’s Cassini spacecraft, which passed the Moon on its way to Saturn; and India’s Chandrayaan-1, which orbited the Moon a decade ago. All found evidence of water or its components (hydrogen or hydroxyl).

But how these atoms and compounds form on the Moon is still an open question. It’s possible that meteor impacts initiate the necessary chemical reactions, but many scientists believe that the solar wind is the primary driver. 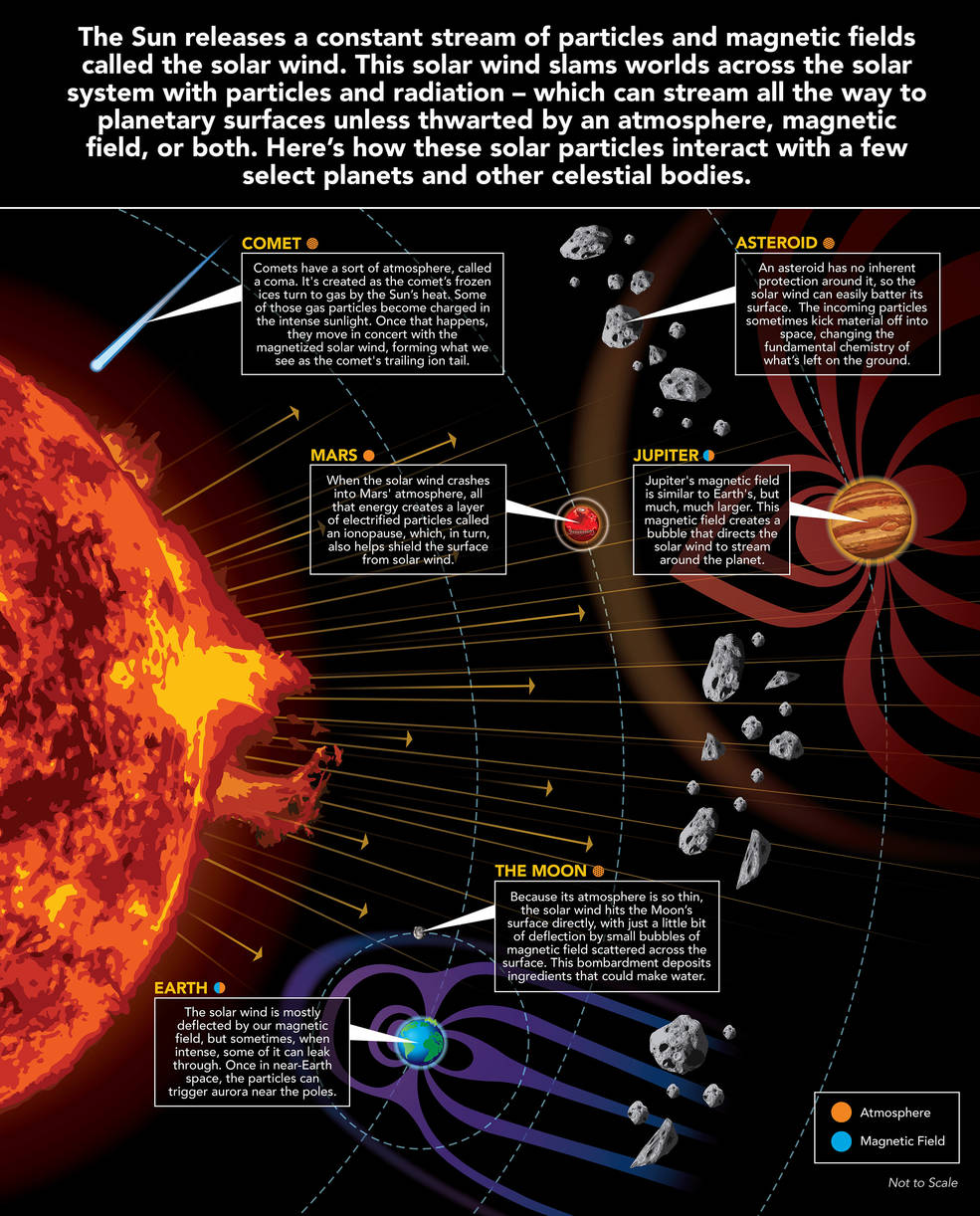 The Sun releases a constant stream of particles and magnetic fields called the solar wind. This solar wind slams worlds across the solar system with particles and radiation — which can stream all the way to planetary surfaces unless thwarted by an atmosphere, magnetic field, or both. Here’s how these solar particles interact with a few select planets and other celestial bodies.
Credits: NASA’s Goddard Space Flight Center/Mary Pat Hrybyk-Keith

Tucker’s simulation, which traces the lifecycle of hydrogen atoms on the Moon, supports the solar wind idea.

“From previous research, we know how much hydrogen is coming in from the solar wind, we also know how much is in the Moon’s very thin atmosphere, and we have measurements of hydroxyl in the surface,” Tucker said. “What we’ve done now is figure out how these three inventories of hydrogen are physically intertwined.”

Showing how hydrogen atoms behave on the Moon helped resolve why spacecraft have found fluctuations in the amount of hydrogen in different regions of the Moon. Less hydrogen accumulates in warmer regions, like the Moon’s equator, because hydrogen atoms deposited there get energized by the Sun and quickly outgas from the surface into the exosphere, the team concluded. Conversely, more hydrogen appears to accumulate in the colder surface near the poles because there’s less Sun radiation and the outgassing is slowed.

Overall, Tucker’s simulation shows that as solar wind continually blasts the Moon’s surface, it breaks the bonds among atoms of silicon, iron and oxygen that make up the majority of the Moon’s soil. This leaves oxygen atoms with unsatisfied bonds. As hydrogen atoms flow through the Moon’s surface, they get temporarily trapped with the unhinged oxygen (longer in cold regions than in warm). They float from O to O before finally diffusing into the Moon’s atmosphere, and, ultimately, into space. “The whole process is like a chemical factory,” Farrell said.

A key ramification of the result, Farrell said, is that every exposed body of silica in space — from the Moon down to a small dust grain — has the potential to create hydroxyl and thus become a chemical factory for water.